The other day LG and I went to the park with some of the girls from church. We had a blast fishing with Abigail and her friends and their dads.

I wore my new crazy hat. I am a hat person. I love hats and this one caught my eye back at Cracker Barrel a while back. I know, I know, it’s a little much but I love it. You can wad it all up and throw it in your purse. LG isn’t much of a fan, but he knows to deal with my crazy fashion sense. I am sure that he secretly hopes that I will grow out of my love for the hat before there is a reason for me to wear it somewhere embarrassing: which is pretty much nowhere. LG never cares what people think about him or his crazy “so far from trophy wife it’s pathetic”. 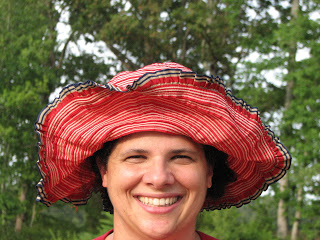 Anyhow, we were walking down to the pond and we walked past a group of men that are a certain ethnicity. This ethnicity always seems to be attracted to me for as long as I can remember.
As we got passed them, I turned to LG and said, “See, did you see that? They were totally checking out your wife!”
LG chuckled and replied in all seriousness, “Alice, I know you’re hot and all, but I don’t think they were checking you out.” I got all defensive and said, “They most certainly were.”
LG quietly reminded me, “It’s the hat” and left it at that. Um, what could I say to that? No matter how badly I wanted to think I was hot, I knew he was right.
But, don’t feel bad. Stop crying for this fat mid 30’s woman who doesn’t get checked out by strangers anymore. It turned out o.k. because just a few days later we were driving down the interstate. I was in the driver seat and LG in the passenger side. A truck full of construction workers passed me on my left.
The cute muscular tattooed worker in the passenger seat winked at me. Yes, he winked at me. The 16 year old girl inside of me got all excited for sec. and then dragged myself back to my reality that I shouldn’t care if this guy winked at me. Me to self: “Alice you are married and almost 35, and you don’t need to be excited about some obviously drunk construction worker!”
After gathering my composure from the combined feelings of shock and anxiety that he had the gall to do that when my big tough husband sat right by my side, I turned to LG, “Did you see that? He totally just winked at me!” LG said totally unabashed, “Yeah and he waved at you too.” He really had waved too right after he got too far to see me in his rearview mirror, but I barely noticed because I was still talking to myself. It didn’t seem to even bother my man, and half of me was upset because I wanted LG’s testosterone to take the guy out. I didn’t say anything because the other half of me was just happy that he couldn’t say it was only because of the hat.