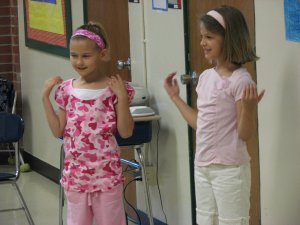 Abigail went out with her group of church girls last night and sang to some people at a nursing home. (This picture is not from last night, but from a school thing last year – I included the pic. to give you the idea of how cute 8-11 year olds) Aren’t they darling? I am sure the nursing home loved their company last night.

Anyhow, on the way home, I was very impressed with Abigail’s observations of the night. She was telling me all about the people that she met.

“Mom, there was this really old guy who was 97. There was a lady who was deaf and they had to write everything on a paper for her. There was a black guy, and it was his birthday.” She even told me the people’s names.

Sophia and Bella were listening to the conversation and started asking Abigail questions about her adventure. Bella being inquisitive about the aforementioned deaf person asked me, “Mom why would they sing to a dead person?”

I was glad that the girls were paying attention to Abigail’s story, but who would have guessed the dead person association of my 4 year old? I guess I better start writing my mommy speech now for reassuring Bella when it is her turn to go to a nursing home to sing. Really, how am I going to handle this with honesty? It’s not like I can say, “No Bella, don’t worry, there aren’t any dead people at nursing homes.”

This reminds me of another story. Back in December, we had an unfortunate death in the congregation that shares our building. I was in charge of our ward party that was to happen the evening following the funeral. I had a bunch of things that I needed to drop of at the church early because I had to work the next morning. So I stopped by the church late after the funeral was over.

I wasn’t sure if they would have left the casket at the church overnight until the following day’s graveside service. (I believe they did this with Grandma Gold in VA – every state law is different to this effect and I wasn’t sure what TN law was) As my girls love to run the round hallways as soon as they get into the church, I warned them to stay close by because there may be a casket in the cultural hall. You can imagine where the conversation went from there…

I had tried to play off all the questions so that they wouldn’t be too afraid of ever entering the church ever again. I had told the girls that a funeral would be over the next morning and there was no reason to be afraid because a funeral is “like a party for dead people”. O.k. hindsight is always 20/20! Yes, I could and should have given a better explanation than that.

If you couple Bella’s amazing imagination with her slight anxiety, you can imagine what she thought was going on in the church at the party for dead people. I was surprised that she still wanted to go inside when I had given her the chance to just stay in the car while I ran a few things in. Do you think that she was showing bravery or did the sure terror of being alone in the van when the party all came out of the building egged her forward into the building with mom? I think it must have been the latter, the way she was clinging to my leg.

Either way, whenever I die, I hope all my girls will remember that they are invited to my party for dead people.

I brought my daughter Caroline Grace to see a very talented student performing in School of Rock. I love being a teacher. I love my students. I love my theatre-loving daughter/theatre partner for life. I love @andrewlloydwebber And I love the arts. Woot woot. Perfect evening.
You guys better not miss school next Wednesday.
Mr. Heim is a very beloved teacher at our school. So many of us are heartbroken that he will be leaving @vista_heights next year.
Every day teachers be a one-man calvary.
I'm not just any mom, I'm the real cool Mama G, even at church.
I started something I'm really proud of in my classroom. When a student gets a baby brother or sister, I let them pick a used board book for them. The only stipulation is that my student reads it to their newly-arrived sibling at least one time. Every baby should have their own book. Just call me Dolly because I'm the @vista_heights @imaginationlibrary
%d bloggers like this: