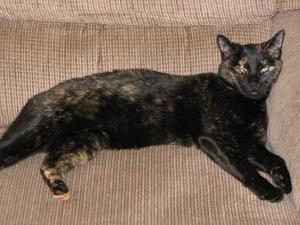 This is a picture of our cat Kitty Bear and her archnemisis Snowball. Snowball is a neighborhood stray who can hunt a bird down like no other. Snowball also hunts down Kitty Bear.

How did the neighborhood stray get a name, you ask? Well, from a little girl, of course. If it was named by some boy its name would be dumb cat or something like that. Our former neighbor, Hailey, adopted this stray and named it Snowball. The cat looks nothing like a snowball, but it does have a destroying affect and so I guess that name is appropriate. Snowball will never let a human anywhere near it and so I guess technically he was never adopted…especially since Hailey moved away over a year ago and has never come back for the cat.

One thing snowball does have in common with snow is only the yellow stuff. The cat pees everywhere. It is so annoying. For a long time, she would pee on our porch. She used to sleep under our window until we got Kitty Bear. One day I went outside with the kids and the next thing we know there is a catfight going down right before our eyes…..can you say the word trauma?

Now, whenever the cat gets within 50 feet of our home, the kids will spot him out our big bay window and run out and holler at him. It is always the same words, “Get outta here Snowball!” So funny…they have learned to copy me. On their way back in the house, all three of the girls will mumble under their breath, “Stupid Cat”.

Why do we keep Snowball around. Sure, we could catch him and take him to the pound. But we feel like Snowball is giving Kitty Bear character. The real reason though is I am terrified of mice, and I have never ever seen one since we have moved in four years ago. Snowball is good to keep around!