Yesterday I took my car into JiffyLube to get the annual Safety and Emissions Inspections. While I was there, the technician told me that I would need new brake pads on my rear brakes to pass the Safety test. I told him to go ahead and put them on so that I could just be done with the process all in one day.

After a few hours, he called me out to the auto bay, I paid $250 for all the services received (safety, emissions, oil change, radiator cap/top-off, air filter, rear windshield wiper and rear brake pads. ) He said the other technician had perfect timing as he was just walking up from taking my beloved mini-van on the test drive for the brakes.

I had papers, keys, and receipts in hand ready to be reunited with my car. It took me a minute to figure out what was going on as tech2 walked behind me and said to tech1, “Dude we have a problem. You need to call ________.  I _________ (I didn’t quite hear what he said as I didn’t know he was reporting on my car)_____. The whole front side of that Honda is all messed up. I perked up at the mention of Honda as my mini-van is a Honda. I turned around and faced the guys. Tech2 looked a little shook up and immediately apologized, “I’m so sorry, I just crashed your car.” I replied, “Are you serious?” as tech1 said, “You’re messing with me.” “I’m not dude, it’s over on the other side by Beto’s. Ma’am, I’ll walk you over there.”

We took the two block walk from one end of a large parking lot around the other stores to the other and this is what was at the end of it. The brakes had failed at the nearby stoplight. The ambulance was just pulling up as the people who my guy had rear-ended had called 911. They were a couple in their 70’s and so very sweet. Their grown daughter was in the back seat resting her head on the front seat and was all shook up. (I am tempted to say she was faking, but that wouldn’t be nice – I mean really though her parents  who are 25 years older were perfectly fine,  but maybe she really is just fragile?)

The poor kid (tech2 from JiffyLube) who had just crashed my car was on the verge of tears. While staring down at my most vital transportation, I forced a smile,  grabbed his arm, gave him a half hug, and told him, “These things happen. It’s just life. Don’t be too upset with yourself. I’m not mad at you, at all. I kind of needed a new car anyway.” And then I got embarrassed and almost as an afterthought I inquired, “Are you o.k.? Are you injured?” He said he was fine and admitted he was shaken up and worried about being fired. He said, “I’m going to cry right now.” I told him he could cry in front of me any time, “I’m a mom” and then insisted, “I’ll go to bat for you; they better not fire you. Accidents happen.”

I was proud of myself for staying calm and gave myself an invisible pat on the back for being mature and keeping perspective that people matter way more than things. Period. No contest. I was also silently thanking my old therapist John, Glennon Doyle Melton, Brene Brown, and God for teaching me about shame (the damage it causes) and the value of souls.

The paramedics started loading the fifty-something-daughter onto the stretcher. She was a waif of a thing and seemed not all quite there. I would be tempted to say she has problems with drugs, but that would just be because I lived in TN for so long and dealt with so many of my husband’s drug clients. If I find out she has cancer or something I will feel really bad for passing judgement and for my honest admittance of my crime. I really need to practice NOT SHAMING and give her the benefit of the doubt. I hope she has cancer instead of a drug addiction. (Man, that is just wrong.) It could be that she really was in shock which would explain her shaking and incoherence. {I openly admit I am still working on making my first assumptions about people the good ones instead of the bad.} I got on the phone with LG to have him do the pre-school pick up for me and then called our insurance agency. I then got all my paperwork together for the officer who pulled up at least three minutes after the ambulance and firetrucks. Funny, the police department is located right across the street.

I’ve been extremely happy with the way that JiffyLube has taken care of the situation and can honestly say that this incident won’t keep me from using their services in the future. They immediately reimbursed us the $250 of services without us even asking for it, got us a rental car less then 24 hours later, and have insurance to cover our car damage. They’ve always been good to us in the past, and you know what? People screw up. Like my brother said, “The best you can hope for when people screw up is that they will make it right,” and JiffyLube has gone above and beyond at making it right. Trusting them with my vehicles in the future may make me stupid , but I think it makes me more forgiving then anything and that is way more vital to my emotional health then my IQ level.

So, today I picked my kids up from school in the rental van, and we headed over to retrieve our belongings from our crashed van. The whole way to the collision shop Bella and Sophia said all they cared about was saving C3p0. He’s had a spot on our dashboard for the better part of 8 years and is quite handy when it comes to identifying our vehicle among the hundreds of other minivans in the parking lots of the many family-friendly establishments we frequent. You know: church, wal-mart, the city pool, library, grocery store, sporting events, etc.

Bella was one happy camper when they retrieved C3p0 from under the front seat of the car.
Sophia was even happier, but refused to pose. 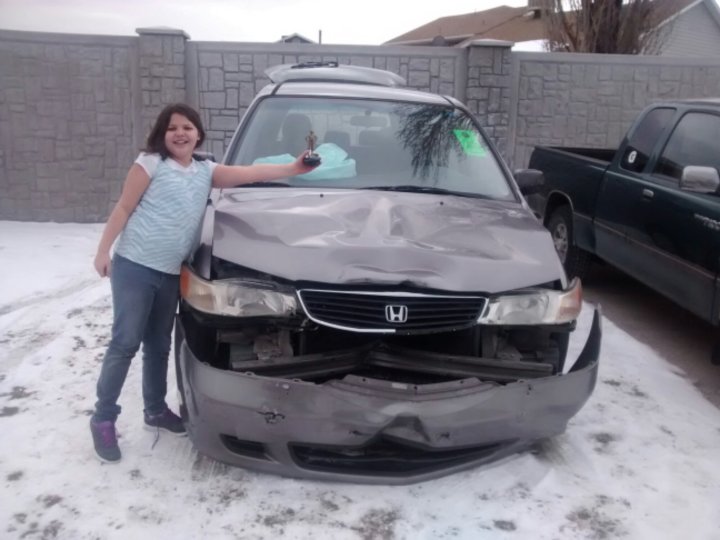 Now I know they are kids and don’t get all the ramifications of securing a new car loan and locating and purchasing a new car, but I have to say that I was proud of my kids and their concern for c3p0. In the past 24 hours they haven’t complained about me being on the phone constantly or having to ride everywhere squashed in dad’s sedan. They’ve just rolled with the punches and showed concern for the drivers involved in the accident; they’ve been helpful and have joined us in laughing about the whole thing. My most parental pride came, however, from their main concern being for a $5 sentimental trinket. They embraced it way more then the brand new rental with all the bells and whistles. It’s days like today when I pat myself on the back and say, “Way to go Alice, you aren’t totally failing as a parent.” Maybe someday they will grow up to care more about the crasher of their car then their car too. I hope so.

The best news today was from JiffyLube’s District Manager. At the rental car place he told me that they would most definitely not fire Mark the driver. The insurance company low-balled our offer and we really really don’t want to go back into a car payment after 10 years without one, but as we figure out the details, I am going to set C3p0 next to my laptop to help me remember what is really important. Once again the kids are the teachers and the mom is the student.

And here is a great argument for why when your kids start driving you should want them in a vehicle with a trailer hitch.

Here is the other car. Barely a scratch.

A few VERY lucky students are going to win this limited edition glass ornament for reading and winning in our end-of-the-year Read-a-thon contest.
It's so much more fun to work after contract time in a room decorated for ❄️ Winter!
Today, I took a personal day to spend some time talking with some BYU PhD candidates hoping to become school psychologists. It was fun and a little startling to see that they were ALL women.
Thank you @kslnews for sharing the new Utah flag. I think this was the flag I voted for. What do you guys think? What is being represented here about our great state?
Ha ha ha. Thanks to my friend Letitia for sharing this laugh.
Finally going home for the night. Most people don't get to see the school look like this.
Loading Comments...