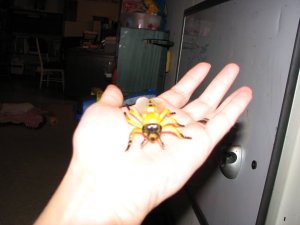 Yesterday morning I was reading this crazy news story about a woman that had a bat hanging out under her bra.

She thought the weird vibrating sensation was being caused by a cell phone at first. Seriously. You have to be kidding me. Somebody makes these stories up. How could a woman put a bra on without knowing there was a bat in there?

I was then reminded of something that happened to me just about a month ago.

I had cleaned out my minivan so that I could haul some yard stuff in the back. This included removing the big and ancient middle bench all by myself. (My beloved Quest was engineered before the modern collapsing seats were invented) Removing the middle bench is quite the process and requires a lot of muscle and agility. Not to mention the ability to avoid the showering crumbs of long forgotten food particles and toys.

On my way to our local garden center, I started feeling something in my bra. More precisely in the cleavage. I thought that I may have another stray hair from my thick head of hair. (We’ve already established that I don’t have hair on my chest.) I started to try and feel for it. (I know you women know what I am talking about) As I was driving, I grabbed at my shirt so that I could get a good look down there. Can you even imagine my mixture of surprise and disgust as I caught a vision of the big nasty red and black bug positioned just perfectly to be staring me right back in the face. And, I am not even going to mention the 4 inch long tentacles that almost caught me square in the eye, no joke. I almost swerved off the road.

I stopped the car to get a closer look. I roared in laughter as I realized that the bug (in the same family as the one shown above) was a party favor received by the girls. How relieved I was to retrieve something from my bra that was plastic and dead and completely still compared to what I was preparing myself to have to pry outta there.

Oh the life of a mother. You just can’t make up stories as good as mine. Not unless, of course, you are the idiot that put your bra on before checking for a baby bat. Every woman knows to do that.
P.S. I just read this post about the same story from Say No To Crack. You have to read her reference to second base…funny.