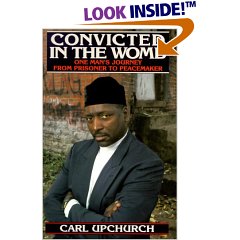 The kids and I are all home from church today because Bella has been sick. It is Sunday, the day I try to rest and think about spiritual things, so I thought that maybe I should blog about something a little more serious. Gangbanging seemed serious enough.

I have been reading this book called “Convicted in the Womb” by Carl Upchurch. I borrowed it from a friend of mine who is getting his Masters to be a Therapist. It is a good book that allows you to get into the head of a child who later finds acceptance by joining a gang.

Because I try to be a good Mormon girl, I really cannot recommend this book. The swear words just keep on coming and some of these words are bad enough that I have never even heard them before in my entire life. And because I am a little bit rebellious I just keep reading, but at least I simultaneously pray that I won’t advert to pulling out the curse words the next time I get angry. I am not reading the book for the curse words, I am reading it because I want to understand the human race better. It is so unfortunate that there are actually children in this world who grow up in an environment like Carl Upchurch’s. It is just so foreign to me.

For example, he had one pee stained mattress on the floor that was his bed. The mattress was located on the underside of a leaky sink. The family’s rat trap would need to be emptied almost every morning. The cockroaches were so bad that he slept with the blanket over his head so that they couldn’t climb all over him at night. His grandma was a prostitute and his mom did nothing but collect welfare checks. Carl never got any affection or affirmations or anything that could be construed as positive. He never was taught to shower or brush his teeth and never had clean clothes. To my dismay this was in Philadelphia the 60’s. He went without food a lot and it was his own responsibility to get up for school and out the door every day, from the time he was in kindergarten.

I have been living in a state of shock for the past 24 hours while I have been reading this book. I know that there are kids out there that live like this: a lot of them went to Abigail’s old school, but I just didn’t realize that it was this bad. It makes me want to go and round them all up and bring them home for some good old fashioned love and concern.

So, it now makes sense to me, while it never has before, why these kids grow up to be gangbangers. Being in a gang is the only way they find belonging. While our children grow up with that at home, the only way for these gangbangers to have a similar experience is to join a gang. So, sometimes you have to get through all the cursing to learn something new. Who of us does not want a solution for gangs? I am here to tell you that the solution is so simple: it is pretty much the solution to every societal woe: the solution is simply love.

Well, the reason for this entry, is to write a story about my mother. As you all know, my parents are both pretty crazy. It wasn’t hard for them to produce a child like me. I got a little of each of their nuances which are slightly crazy and a little crazier. I love my parents dearly and after reading a book like this, I am more grateful for the way that they raised seven children in a loving and flourishing environment.

So, my mom took this loving and flourishing environment with her everywhere. She learned to love from her mother; it was in her DNA to show love and concern for everyone she met, especially children. I cannot tell you how many times, I would come home to find my mom sitting at our kitchen table discussing something heavy with one of the friends of mine or my siblings. I never understood why our friends liked to talk to my mom so much. As a teenager, I did everything I could to avoid her. But again, reading has given me new understanding. These friends felt the unconditional love of my mother, some of which may not have felt it at home.

So, here is the funny part of the story (I bet you were getting worried that you wouldn’t be getting a chuckle today, huh?)

While we were growing up, we had a few favorite places to take family outings. One was the beach, one was Thrifty’s to get ice-cream, one was the Oceanside pier to get XL jawbreakers. Others were the movies, Sav-on to get some candy, and the mall to get a Shaved Ice. (Funny that all of these places involve food) And lastly but not least by any means was Show Biz. Show Biz was the original Chuck E Cheese. All of ShowBiz’s have been converted to Chuck E Cheeses, including the one from our neighboring town Oceanside, CA.

My mom and dad would take us to Show Biz a few times a year and it was a huge treat. I am sure that my mom had to convince my dad to spend the money. Buying pizza and tokens for seven kids is not a small feat. I mean most people only spend that kind of money when one of their 2.5 children have a birthday party and invite all their friends.

So, this one Saturday, we had all had our fun at Show Biz. I am sure we had been there for a good couple of hours before we headed out to the station wagon to go back home. What a surprise that we exited into the middle of an ensuing gang fight. Now, you have to know my parents to know how unfortunate to the fight was the arrival of my parents. My dad was and is a big tough former Highway Patrolmen and my mom is an unlicensed and unofficial social worker. (She probably helped more kids in her lifetime than any social worker could imagine). My mom also has been known to have a mouth like mine. One day she almost got my dad into a fight with a Hells Angel at the 25cent hamburger joint (but that is another story)

So, what happened from this point on is not only the funny story but an inspiration to mankind. Mind you, all seven kids are lined up like ducks in a row behind my parents. My brother Erick was approximately the same age as these teenage boys and he was staring on up front with mom and dad. My mom says to the gangbangers, “Boys, what do you think that you are doing? This is no way to solve anything. Don’t you know that people care about you? We don’t want to see you killing each other.” My dad stood next to his wife in words and stature. He didn’t say anything, but his mere presence was enough.

One of the gangbangers had shouted out, “Hey (probably some cuss word), mind your own business.” The details are shody here, but I am certain this is approximately accurate to the actual story. My dad’s glare was enough to shut the gangbanger up. My mom continued on as her initial speech didn’t seem to have enough impact. My mom and dad were not about to walk away and let some kids kill each other. And remember this was in the 80’s before the cell phone was invented, so there was no, “Hurry call 911.” The following words came naturally from my mother’s mouth, “Boys, this is nonsense. My husband and I love children too much to let any one of you get hurt today. Now c’mon inside and my husband will buy you all some pizza.”

It was as if a bomb had been dropped. I can still remember the shock so apparent on the faces of these hardened criminals. A stranger was going to buy them ALL pizza. Both gangs looked back and forth from their homeboys to their blood sworn enemies. The glances were asking each other, “What do we do now?” There was no need for them to discuss because my parents didn’t give them any time.

My mom went and wrapped her arm around the leader of one side and my dad walked over to the other. They led the leaders into Show Biz and there was no other choice for the homeboys than to follow. We little Wills children brought up the rear. What a delight it was to see my mom take all the gangsters into the Show Room and find them each a seat, while my dad went and doubled his money output for the day by ordering 12 more pizzas.

It didn’t stop there. My mom said, “Rick, get these boys some tokens. They fight because they don’t have anything better to do.” She made sure she said that loud enough for them all to hear.
Dad bought them each a generous amount of tokens, (which after clarifying with my mom and dad, was only really 4 tokens each -all they could afford-, but hey, that was still another 20 bucks they didn’t really have) hoping that if he and mom could keep them inside long enough having a good time, then maybe the fight would be cancelled all together. We all exited feeling like the heroes who had saved the day.

The discussion in the car on the way home went something like this. Mom to Dad, “Do you think that they will still have a fight, should we call the police?” Dad said, “I can’t believe you Sharon. You are one crazy woman.” Mom to Dad ,”One crazy woman that you love. And, one crazy woman that may have just saved a life.” Mom to kids,”Remember this kids, all people have a part of them that just wants to be loved. They act badly because they haven’t been loved.”

Yep, that’s my mom and dad. As a couple, they could do anything, including stomping out gang activity from the world as I knew it.

And in the words of John Lennon: