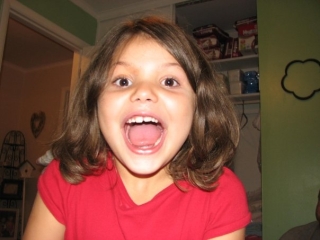 On Sunday, my hubby, LG got up to give a talk.
He was as cute as usual; I love hearing him speak.
He never does it publicly unless he is assigned.
Following, our three girls, me,
and the ward’s Young Women’s choir,
he got a little choked up as he said that good women are a theme in his life.

After all, he is the dad of four beautiful daughters
and the husband of a pretty hard to handle wife.

He then told a funny story.
Hit the read more. You don’t want to miss this one.
It’s about the kid shown above. And football.

I never blogged this when it happened so I was glad for the reminder found in my hubby’s brain.

About a year ago, LG was serving as a Scout leader.
Our time was always precious,
and so LG took Bella with him to a Wednesday night activity.
The boys played football and they were great to include Bella.
She loved it and was talking up the game the whole way home.

She then begged for a football for her birthday.
LG went out and got a football for her.
Usually the gift buying is up to me, so it was a pretty big deal.
Bella was so excited, tore into the package,
and entreated her dad to “play now daddy.”

Before they could go out to the yard
so that LG could show me that Bella
has some pretty good throwing potential,
Bella ran with the ball back to her room.

When she came bouncing back down the hall,
I think LG had a taste of reality.

She handed LG the ball,
which she had sprayed with adhesive glitter.
“Look dad, I made it sparkle.”

I love that girl.
And I am secretly jealous that I never played football.
I didn’t want to be one of “those” girls,
but I sure do love the sport.
I think I could have been good at it.

It would be a dream come true to see Bella succeed with football.
And I don’t care what you really think.
If you ever see her, you better tell her
how cool it is that we just signed her up
to play in our local flag football league.

Let’s just keep her balls glittery.
Just to be safe.

Mr. Heim is a very beloved teacher at our school. So many of us are heartbroken that he will be leaving @vista_heights next year.
Every day teachers be a one-man calvary.
I'm not just any mom, I'm the real cool Mama G, even at church.
I started something I'm really proud of in my classroom. When a student gets a baby brother or sister, I let them pick a used board book for them. The only stipulation is that my student reads it to their newly-arrived sibling at least one time. Every baby should have their own book. Just call me Dolly because I'm the @vista_heights @imaginationlibrary
This shows you why I love teaching ESL so much. They are definitely some of my most difficult classes to manage and plan for, but the love that I receive from these bilingual kids not only comes in beautifully-wrapped packages in the forms of languages and cultures of the world but also from the most beautiful, gracious, and open-hearted students in the world. 🌍 🏫
See my last post or come up to the second-floor B hall to read these in person and cast your vote. Bring your phone or Chromebook to scan the QR code.
%d bloggers like this: