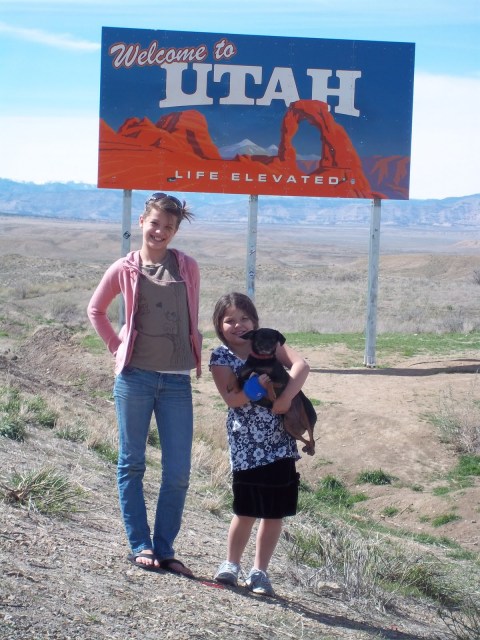 I only made time for a photo op when I knew we were on the last leg of our trip This was taken shortly after I stopped at the Utah Visitor’s Center to make sure I wasn’t lost. The previous 100 miles were nervous making. I was sure I took a wrong turn somewhere in Colorado. For 100 miles I debated with myself about turning around. I could have kissed those old ladies that live in the middle of nowhere when they told me I was on the right route. My phone’s GPS wasn’t working and there was no service to double check with LG that I was following my directions correctly. And the atlas was with LG in the moving van because Abigail loved checking it throughout the trip. All I could do is be the Mormon Pioneer that I am and forge ahead.
Oh yeah, funny side story. When I called my dad to talk to him about the details of our arrival the week before we left Tennessee, we got talking about the move-in. He asked me if we had a hand cart. I couldn’t figure out why he asked me that. Did all people need an obligatory historical handcart to move into the state of Utah now-a-days? I had never heard of such a thing and there was no way we would be fitting one in our truck along with the thousand pounds of food storage. I told my dad, “No dad, we have a moving truck. Penske. It’s the 21st century. It’s not going to take us months. Hopefully. Just four days, dad. Hoepfully.” He and I laughed heartedly when he explained that he meant one of those little dolly things to unload the boxes from the truck.

Here are the only other photos that were taken on the trip:

Even though this was taken on the same stop at the Welcome to Utah sign, it could speak volumes for the wind that we experienced all the way through Kansas, the third day of the trip. We traveled through what seemed to be a lot of dead farmland, but as the car was thrown all over the road by the wind and repeatedly ran over tumbleweeds it was no surprise that we were in tornado territory. All I could do is hold tight, click my heals together and chant repeatedly “there’s no place like home”. 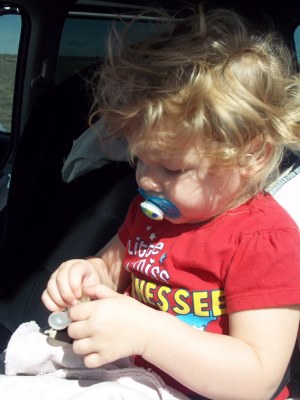 Olive made it. She thought she was miserable until we arrived and she found out that her new home would be “outside only”. She hates the garage, even if it is attached to the yard for her own leisure. She especially hates it when we are eating dinner. She goes outside and howls at the kitchen window, hoping for some scraps. The kids have made a game of standing on the kitchen bench and waving to her throughout our meal. I can only hope that as I adjust, so will Olive. At least I’ve figured out how to get her to stop howling through the night. Apparently locking her inside her kennel makes her feel safer. Go figure?
And there are no pictures of Kitty Bear. We drugged her up really good every morning and the drugs usually lasted until we had 1 -2 hours left each night, when while we were all at our end’s wit, we tried to ignore her meowing and scratching at her kitty carrier. I won’t even mention how when we stayed with our friends in Colorado on our last night, when we went to leave, we couldn’t find her anywhere in their garage. We searched for a good 15 minutes. I thought it especially generous that we searched at all considering she had kept us up the whole evening before meowing at the door.
Kitty Bear must be a true Gold family member. She is always out to entertain. For some real fun, we couldn’t find her at all the whole day after we arrived in Utah. We were sure she had taken off to try to go back home to Tennessee. She had snuck in the house and was hiding in the food storage room. I guess that is where she took the most comfort because it’s the only room of our new house that has any semblance to her old space. Boy was I relieved to find her! After 4 days of drugging and dragging and scratching and wrestling and chasing, she had better not run out on us now.

A great shot of a dirty windshield if I do say so myself.  You would never guess that at every gas stop the girls fought and fought over who got to do the windows. That wasn’t the only fight along the way, but this mom stayed focus. They pretty much fended for themselves. Caroline came up with the game of throwing her pacifier at the windshield and yelling “paci, paci, paci” when she was really had it, which was pretty much every day from an hour after we got into the van. Notice the photo above where she has one pacifier in her mouth and one in her hand. Every stop we would gather as many as we could like ammunition. 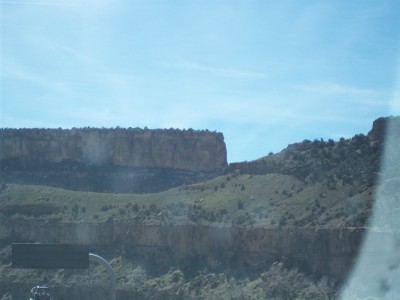 I was taken back by the blue in the skies. Who would have known that we barely missed a great big snow storm the day before. Only LG who was driving the moving truck with car trailer down the Rockies. You would think that the ritziest ski resort in the nation, Vail, would do a better job of making sure their roads were plowed. Needless to say, these Tennesseans who are very out of practice driving in snow were white knuckled for about three hours. Especially after passing accident after accident while winding and stopping and travelling what seemed straight downhill with a gorge on the side.

And for good measure. Here is the best shot Abigail could manage of the most entertaining thing we saw the whole way. Forget the St. Louis arches or the majestic snow topped Rockies. Here is what got the most laughs. The Wiener Mobile. It’s a good thing that Sophia was with dad in the moving truck because of all my children she would be the one to get the bright idea that this should be her only formidable mode of transportation when she turns 16.

As you all know by now, we made it.

Thanks for all the prayers.

What I really want to know though is who is the jokester that included the request for the WienerMobile
and how did you know it was exactly what I needed after four days on the road?

I brought my daughter Caroline Grace to see a very talented student performing in School of Rock. I love being a teacher. I love my students. I love my theatre-loving daughter/theatre partner for life. I love @andrewlloydwebber And I love the arts. Woot woot. Perfect evening.
You guys better not miss school next Wednesday.
Mr. Heim is a very beloved teacher at our school. So many of us are heartbroken that he will be leaving @vista_heights next year.
Every day teachers be a one-man calvary.
I'm not just any mom, I'm the real cool Mama G, even at church.
I started something I'm really proud of in my classroom. When a student gets a baby brother or sister, I let them pick a used board book for them. The only stipulation is that my student reads it to their newly-arrived sibling at least one time. Every baby should have their own book. Just call me Dolly because I'm the @vista_heights @imaginationlibrary
%d bloggers like this: