After posting about Sophia’s eight goals, I have been feeling guilty for not showing Bella out on the field. To tell the truth, I had picked out some pictures the other night, but I just got sick of waiting on upload time.

Here are a few of my fav’s of Bella. I guess I will have to get to Abigail later. 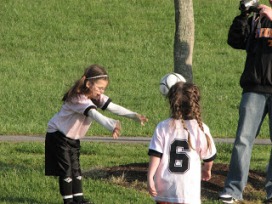 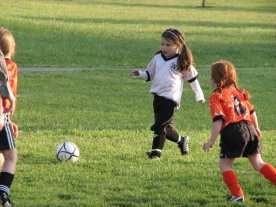 While Abigail plays offense and defense, Sophia is our offensive player. But, Bella , well she is most definitely our defensive player. We have been bragging on her abilities to “get that ball out of there” for the past couple of weeks. She never runs as fast as she does when she is trying to beat the opponent to the net.

At the last game, LG and I laughed so hard when we realized Bella’s motivation for getting to the net. I know she likes to stop the goals, but we figured out that she really loves to fish the ball out and hand it to the ref. Really we think that she only runs THAT hard to put herself to good use. She is such a good helper. She is such a hard worker. She loves to be useful. She is so much like her mom it is pathetic. Should we start her in therapy now or later?

Gifts are my love language and so are cookies! Also, Valentine's Day is my favorite 😻. So cute. Thanks to my student I for making my day!
I had to come to the window to call my daughter. Zero reception in my classroom. While waiting for my phone to connect, I found the perfect spot to lay and indulge in some sunshine. Now, I don't want to go back to my desk. #catvibes #covermeinsunshine
Yesterday, we had a Lockdown Drill, and I got sick of explaining to students where their bodies would need to NOT be in case of a dangerous situation.
Are you experiencing a hardship of any sort in your life? Food scarcity? Job insecurity? Sickness?
Winter Break was good to my goal of becoming an Olympic-level napper.
%d bloggers like this: