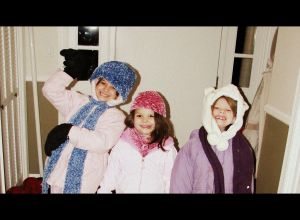 Here is a picture of the girls in January at Grammy and Papa’s. They were thrilled to have a 1/4″ of snow. I had to let them go out at 10 PM to enjoy it…I knew the snow would be gone by morning.

Here are some photos I snapped around town last week when we got a good snow…as you can see it wasn’t a whole lot.
I snapped these photos while I drove the kids to school. (yes, I did drive and take pics at the same time) LG was taking the bar, or I would have been glad to have him do the snow school commute. I guess they didn’t close the schools down or at least start on a 2 hour delay because the weathermen predicted that this would be all we would get.
I am always a little afraid of TN icy roads. I went off the road into a ditch several years ago. When we get snow/ice conditions in TN everything shuts down. It only happens a few times a year and so they aren’t equipped to handle it…everyone just stays home and waits for it to melt away. And it is true that our icy roads are totally more slick than those out in the dessert.
So, on my way home from dropping the kids off, I started getting really stressed. The kids school is a 20 minute drive away, and I was driving through a pretty good downpour on the way home. I would have to go back and get them later in the day, and I was worried about navigating through it all after it piled up all day.
I was listening to talk radio. (while driving, snapping photos, and talking to Bella) People were calling in to the show and reporting treacherous conditions in different parts of town while the talk jock kept saying repeatedly that he hates snow. One woman called in from the west side of town and reported blue skies…I thought she was kidding and trying to cheer up the talk show host…until I hit the interstate…here is what I saw… 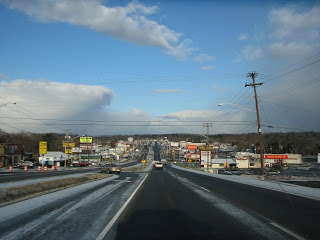 And now you know why all Tennesseans know to constantly check the weather!

It's so much more fun to work after contract time in a room decorated for ❄️ Winter!
Today, I took a personal day to spend some time talking with some BYU PhD candidates hoping to become school psychologists. It was fun and a little startling to see that they were ALL women.
Thank you @kslnews for sharing the new Utah flag. I think this was the flag I voted for. What do you guys think? What is being represented here about our great state?
Ha ha ha. Thanks to my friend Letitia for sharing this laugh.
Finally going home for the night. Most people don't get to see the school look like this.
Sometimes teaching feels a lot like this. Lol
%d bloggers like this: