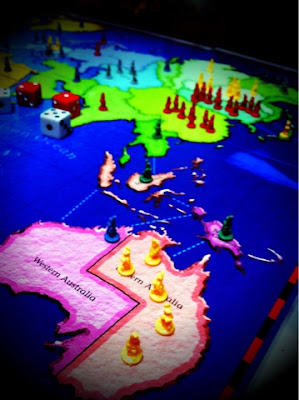 After playing an intense game of Risk with my hubby and kids last week, I had an epiphany. During the game, Abigail (my 12 year old) and I were trying to kill each other off. We were fighting for Australia and both of our armies were scarce.

Before my daughter’s next turn came around (where she would have surely destroyed me for good) my husband swooped in from Asia. He killed every last one of Abigail’s guys (winning the game). I was saved. He was my knight in shining armor. Even though the game was over, hours later, I couldn’t let go of the satisfaction that I felt at being rescued by my man. I was figuratively living in peace in Australia with no enemies in sight.

I thought of the significance of having a man who would come to my rescue. This silly little thing meant a lot to me. I am just a romantic waiting to be wooed, what can I say?

Marriage is a risk that we all should take. It’s a risk because we can’t guarantee that our spouse will always be loyal to us. I have experienced the joy of fierce loyalty in my marriage as well as the complete devastation of having a spouse who is selfish. (Haven’t we all?) I choose the joy. Because no one is perfect, all spouses are sure to experience both.

I wonder what would happen in the world if we all could keep the perspective of fighting for one another instead of against one another? Surely world peace has to start in our own homes and neighborhoods.

I can’t speak for all women or men, but in my own marriage, I know that my husband and I are both much happier when I let him be my knight in shining armor. That requires two things: 1-he has to put me first and 2-I have to let him.

And yes, that goes the other way around. The only way we wives can truly be there for our husbands is if we put them first. That is the miracle of marriage. When you take two people who are fiercely loyal to the other you create a symbiotic and powerful union where two people feel completely safe and perfectly loved.

The beauty of marriage is that over two lifetimes, two people choose to risk their happiness on each other over and over again. There will be heartache, but over time, the heartaches will be minuscule and the love and loyalty will win, as long as we keep risking everything for one another.

Cried to my coworker yesterday because I feel like I am spinning too many plates, and I don't like dropping stuff. But, today, I got to watch at least ten of my kids play basketball, and it made me feel all better.
Gifts are my love language and so are cookies! Also, Valentine's Day is my favorite 😻. So cute. Thanks to my student I for making my day!
I had to come to the window to call my daughter. Zero reception in my classroom. While waiting for my phone to connect, I found the perfect spot to lay and indulge in some sunshine. Now, I don't want to go back to my desk. #catvibes #covermeinsunshine
Yesterday, we had a Lockdown Drill, and I got sick of explaining to students where their bodies would need to NOT be in case of a dangerous situation.
Are you experiencing a hardship of any sort in your life? Food scarcity? Job insecurity? Sickness?
%d bloggers like this: