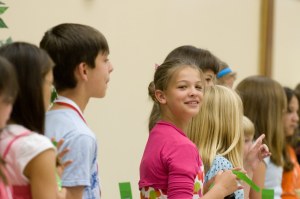 I love my daughters.

I love my relationship with them.
We always have fun! But, I am able to have the most fun with Abigail. I have discovered that the older my kids get, the more ways I can mess with them.

As I blogged about previously, Abigail’s 5th grade year was spent with a lot of teasing because of her first major crush. You can see the side of the face of her beloved smartie pants’ boy Google. It’s only natural that all of her little sisters have also decided that they love this boy. They regularly say his name to get the baby to smile.

They are both so smart and funny that it’s just natural that everyone kind of puts them together. They are smart enough to not take it too serious and funny enough to mess with.
At the end of the year awards ceremony Google was an Awards Hog.
Abigail got a bunch also, but not as many as Google. She wouldn’t want to make him look bad. As they walked up a bunch of times to get their different awards, they each displayed the same quick and determined gate. They were each trying to be humble while they were so pleased with themselves.
I just love these kids.
Here is Abigail’s glance over her shoulder on the one trip that she ended up standing next to Google.
The look says something like, “Mom, you better NOT embarrass me!”
Hope she doesn’t mind me sharing the awesome photo on my blog.
Oh, and kudos and many thanks to my masterful photographer friend Keith Poveda who captured the kodak moment. If you want his number give me a holler.

Mr. Heim is a very beloved teacher at our school. So many of us are heartbroken that he will be leaving @vista_heights next year.
Every day teachers be a one-man calvary.
I'm not just any mom, I'm the real cool Mama G, even at church.
I started something I'm really proud of in my classroom. When a student gets a baby brother or sister, I let them pick a used board book for them. The only stipulation is that my student reads it to their newly-arrived sibling at least one time. Every baby should have their own book. Just call me Dolly because I'm the @vista_heights @imaginationlibrary
This shows you why I love teaching ESL so much. They are definitely some of my most difficult classes to manage and plan for, but the love that I receive from these bilingual kids not only comes in beautifully-wrapped packages in the forms of languages and cultures of the world but also from the most beautiful, gracious, and open-hearted students in the world. 🌍 🏫
See my last post or come up to the second-floor B hall to read these in person and cast your vote. Bring your phone or Chromebook to scan the QR code.
%d bloggers like this: