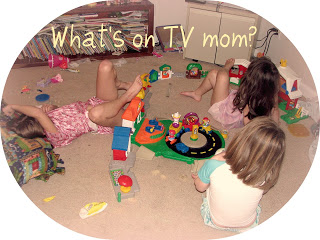 Lori chronicled the flu of what seemed to be her whole blogroll. (that’s how bad this flu has been, or maybe there is some way we have all been passing it from between keyboards?)

Cally (if you link, scroll down to #2, couldn’t get the piknik post to work) inspired me to give you this edited picnik version of the flu at our house.

What does a woman do when she is supposed to rest, her husband is studying for the bar, and they cancel two days of school?

No prob…”Children, you have free reign of the TV, toys, and the snack cabinet. Yes, those 4 boxes of fruit roll ups are not only yummy, they will keep you alive and semi-healthy.” (If you add in the gogurts and dry cereal, they almost get every food group.)

Yes, they wore those pj’s for two days straight. Sophia has been really into keeping up with her new “days of the week” panties that she got for Christmas. Last night I told her that she needed to change out of her pj’s before she went to bed. This is what I hear Abigail exclaim from the bedroom, “Sophia, you are still wearing Wednesday.” This statement was echoed by Sophia in between her fits of laughter.

My mother-in-law will be so stunned…she thinks that I am the clean underwear nazi. I don’t know where she gets the notion, except for the fact that I always pack the girls double underwear when they go to her house. I once said to Faye, “I am not an underwear nazi, I only make them change their undewear daily. How often did your kids change their underwear?” She never did answer me.

We are now in the beginning stages of clean up. I have found at least 50 piles of wrappers that look just like this. Maybe we should clean up after the bar, what do you think? 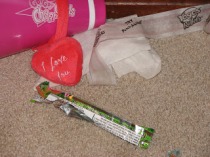