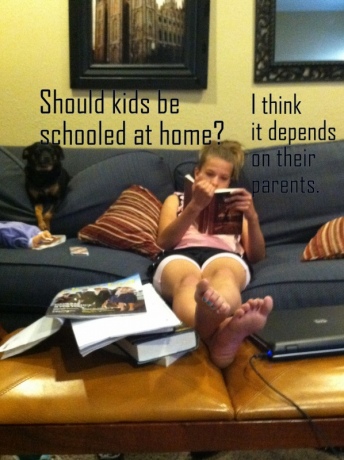 Ever since reading this story and that one about the kid with the My Little Pony backpack, my mind has been reeling.

This 10-year-old kid was being bullied at school because of his blue fuzzy My Little Pony backpack. His mom went to the school to complain. The school counselor mentioned that the easiest solution would be for the kid to get a new backpack. The principal later called the child’s mother and told her that the child was no longer allowed to bring the backpack to school. The mom flipped out. The mom now homeschools.

First of all, let me make two things very clear. One – I am NOT o.k. with bullying. In this instance and in every instance the bully children should have been reprimanded and disciplined. (I don’t know if they were appropriately or at all from the news stories.) However, typically bully children come from bully homes, so there is only so much a school can do to change behavior.

Secondly, I believe children should be given space to be who they want to be. You want to wear a pink tutu and your 12 and a boy? Go for it. Are you a girl who wants to play football? More power to you.

Now, to the point I really want to make that seems to be widely ignored in modern bully stories. Parents, pull your heads out….Every day, you are sending your kids off to war…..and you are not equipping them with the skills that they need.

What skills? The skills of socialization, survival, problem-solving, and leadership to name a few.

Here is some flawed logic that I have seen people use to support their choice to homeschool.

Sweeping generalizations (bad stereotyping)
All the kids at that school are mean. They are all bad kids. I’m pretty sure this is never the case.

Hasty conclusions with inadequete support (more than one personal example for validity for your argument)
In homeschooling this can look like: Well, wow, this kid was homeschooled and went to Harvard, therefore my kid can also.

Non sequitor (It does not follow)
I graduated from high school therefore I can teach my kids til they graduate. Yes, you can, but this logic is really bad.

Casual fallacy (one event merely follows the first and isn’t necessarily because of cause/effect)
My child got in trouble at school today because his teacher was in a bad mood. Is that the real reason? Or is your child honestly having behavior problems that need to be addressed? Maybe your child is causing the teacher’s foul mood and not the other way around.

Ad hominem attack (an argument that is not balanced but based solely on personal opinion)
Common core is awful therefore my kids should not be schooled with it.

Circular reasoning (the evidence and conclusion restate each other)
Schools are failing because teachers are failing.

False dichotomy or false dilemma (Either/or arguments that oversimplify complex answers to two solutions)
I can either keep my kids in a public school I am not happy with or I can homeschool. These are not the only two solutions to a complex problem.

So what does this have to do with the pony kid who was bullied? I believe at the root of both homeschooling and bullying lies a much bigger problem: parents who are not honest with themselves. Parents who are failing and laying the blame on someone else.

In the case of the boy with the pony backpack, I believe the parents failed to teach their child how to be confident in his pony-touting ways. I would never send my kid off to war without the weapons he would need to fight it, and you can be sure that I also would not let my child walk into a cafeteria of potential bullies without first discussing how to defend himself in his unconventional backpack/lunchbox choices.

Likewise, I would not just believe homeschooling to be the best thing for my kids if they were having trouble in public schools. As adults, we have troubles coming at us from every direction. We can’t just hide away at home to avoid our problems. We have to face them head on. The really scary part about a larger percentage of the population homeschooling is the fact that all of the home-schooled kids first learned behaviors at home that may be the biggest culprit in them not having success at school. The solution of pulling them out of school to address the problems that are only perpetuated at home is totally counterproductive. Unless, of course, we gain awareness collectively as a family and put change in motion.

Before you feel all judged, let me give you several examples from my life as a concerned mother.

First, we had a terrible experience with public schooling at an inner-city school in Knoxville, TN where we used to live. The principal was bad. Most of the teachers were heroic. The majority of the student population was grossly neglected. The school was neglected. The playgrounds were falling apart. The school didn’t participate in field trips. EVER. Abigail’s second grade teacher was in her first year and totally ill-equipped. Frustrations were high every day. Abigail would come home crying because the teacher made the whole class miss recess again even though she never personally had bad behavior. She no longer could drink chocolate milk at lunch because the principal pulled it off the shelf with the logic that it was causing misbehaved kids to misbehave even more. Violence was taking place in the second grade. One boy threw a desk at another and broke his nose.  Forget the fact that no learning was taking place. How could it with all the other distractions? Yes, I had every right to pull Abigail out and home-school her especially after addressing our concerns with the administration to not have anything change. We didn’t pull Abigail. She survived the second grade and the next year we humbly and gratefully accepted a “No Child Left Behind” school transfer. Abigail’s new school was a haven and we all loved it. When Abigail went on her first field trip in third grade she was in seventh heaven. Abigail is now fourteen. She often talks about her experiences at her first school. They shaped her into what she is: one resilient, tough, and adaptable kid.

Do I judge any parent who pulled their kid out? No. Not at all. In fact I would applaud their courage. However, I do think that if a parent makes a choice to home-school, they better look around and have a very honest assessment of what their child is going to learn at home. When one home-schools they have to recognize that their child is now being influenced almost solely by their family. Are you going to give them all the experience they need to thrive in the real world? Are you going to be perpetuating in them bad behaviors that you just don’t want to fix: sleeping til noon, having bad hygeine, learning as little as possible, not teaching discipline, etc. If you are going to home-school, I think you should ask yourself WHY your kids are (or would) struggling in public school in the first place….the source of their trouble is more than likely YOU, not the school. The kid at Abigail’s school that was throwing desks was more than likely frustrated with his bad teacher, but the reason he threw a desk while Abigail came home crying every day was the difference of what was taught in their home. It is hard to change. Possible, but hard. You better have a really fine-tuned game plan of how you are going to change yourself and teach your children at the same time.

My other experience in still playing out. Sophia is twelve and does not want to have to attend the school in the boundary of where we just moved. She has not a single friend at this new school. We are working with the school district to get her a school transfer next year back to the junior high where her friends will be attending based on the extreme anxiety she is having over the situation. The district asked for a letter from a health-care professional. We went to the doctor last week. I explained Sophia’s anxiety and her shyness and tendency to isolate. I then said, “If we can’t get this transfer, I will probably just home-school her for a year until we move back to our old school boundary.” The doctor didn’t shy away with her response, “If you are worried about her isolating, wouldn’t home-schooling be the worst possible scenario?” She was right! Anyone who knows me, knows that I in no way am modeling shy behavior for my daughter. She came that way. I, however, as her parent, have to make decisions that will help her overcome her weaknesses instead of feed into them.

Wow, this post got long quick. I think the very hardest part of parenting is being able to get outside ourselves and our flawed personal-protecting logic to honestly assess how our weaknesses are promoting the same in our children. And even harder than the honest assessment is changing. The change has to start with us as.  Yes, this can be done, whether or  not we send our kids to public school or if we home-school, if we are teaching our kids to be bullies or our children are being bullied, but by all means, let’s make sure we are doing the hard work. We owe that to our kids.

Leave a Reply to Me Cancel reply